Till We Meet Again

When you graduate in normal times, you pack things. But in a crisis, you flee. 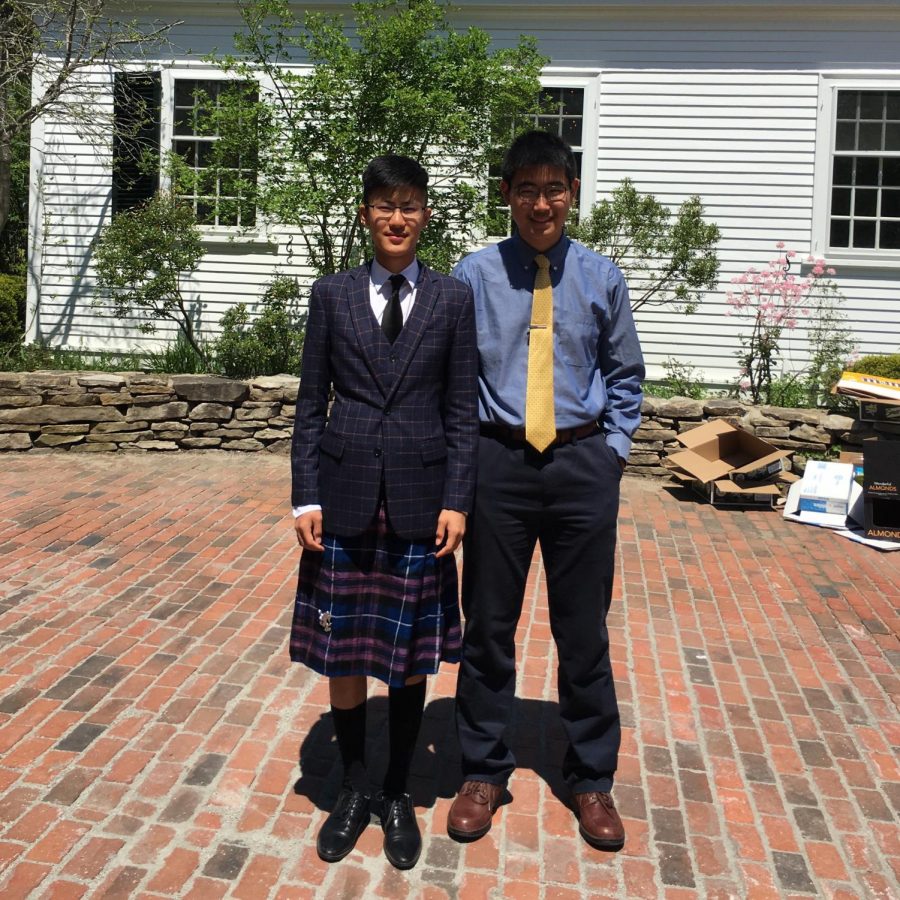 The Author and Alexander--9th Grade

“If I don’t open the graduation packages that Govs has sent us,” Alexander Ding ’20 said during our late-night cab ride in Shanghai, “I will never feel like I have graduated high school.”

“I don’t think we ever will feel that way,” I said to him from the front seat.

He nodded. It was a smoggy day in Shanghai. The city, which hadn’t seen local infections in over a month, was returning to normalcy: the usual traffic was back, alongside the polluted air. Almost everything had reopened, from restaurants to Disneyland, and even nightclubs—at least so I’ve heard.

If it wasn’t for this epidemic, we’d be at a cookout on the turf back in Byfield eating veggie burgers. Alexander would wear his kilt. Or perhaps we would be walking into the dining hall, only to find the whole room watching embarrassing videos of our ninth-grade selves.

When you graduate in normal times, you pack things. But in a crisis, you flee. My dorm room was a mess when I left, and now all my belongings are left to some packing company to be shipped to God-knows-where. My classmates and teachers have become blurry tiles on Zoom; we bid farewell to one another abruptly, and seconds later everyone leaves, marking the end of our last high school classes. No hugs, no tears, not even a proper goodbye.

For most of us, we are living for the moment. The future is in limbo. It is but a vague image from which we ourselves are left out; losing control of our own lives is intimidating, but we are all adapting to it.

Lying beneath Shanghai’s skyscrapers is the Huangpu. Here, the Yangtze, Asia’s longest river, empties into the Pacific. In normal times, traveling to California from Shanghai takes some twelve hours by plane—enough time to finish The Great Gatsby, perhaps the movie as well. But this isn’t normal times; with flights curtailed, borders closed, and the pandemic uncontained, from the other side of the ocean, shines only a shimmering green light—not unlike the one on Daisy’s East Egg dock.

I’ve been nearsighted since I was in grade school. Yet like many others, I also suffer from myopia in the chronological sense—the inability to envision what the world will look like in, say, five years. It’s like biking in the foggy woods when several paths diverge. I try to see where each one takes me, but in the end I gamble. That myopia limits our judgement, and this pandemic has only worsened it. Even September feels distant—and devastatingly empty.

At what point will we have graduated? Or have we already?

Hangzhou is about a hundred miles away from Shanghai. Not far away from West Lake, Alexander and I thought of ways to celebrate the finale of our high school years. We bought two cigars, both of them Cuban imports, and lit them.

But we weren’t sophisticated enough to enjoy them. Without the smell of the Mansion House lawn, it was but a desperate attempt at consolation. Many times Alexander and I had imagined jumping the wall and leaving this place. Before we jump, one of us would point to the sky, the other to the earth—a low-quality knock-off of Raphael’s The School of Athens, which we had agreed upon last summer. We then take pictures and hug our friends and teachers—specifically not the people we hate. We pack up our stuff in our dorms, and our parents drive us to our next destinations.

When I first arrived on campus, I thought I knew everything. But that everything, about myself and the world we live in, turned out to be so wrong; four years have passed, and now I seem to know nothing. It’s like looking up from Ingham Hill at the firmament on a cold, dark winter night. It takes a bit of focus to see the bright, shiny stars because they are so tiny; but we are even smaller than they are.

Reduction is hard. I hate throwing away things—clothes that no longer fit, soccer cleats, postcards from an ex-lover, and the manuals for my Texas Instrument calculator, which I could no longer find. But it’s only by throwing away the excesses of our past—overconfidence, childishness, and ignorance—we’ve created spaces for the new.

The new hasn’t come yet. But curiosity, knowledge, passion, friendship, love, and values, those too precious to be thrown away, will guide us to the better paths. Along with them, humility and the recognition of how small we are and how much out there we have yet to explore.

The Class of 2020, our journey hasn’t ended. But it is time for me to bid farewell to you, at least for now—seniors, juniors, sophomores, ninth-graders, teachers, librarians, staff, The Governor, and especially Ms. Fitzgerald, whom I am fortunate to have as my advisor, and Chris Robinson, my American mother. You have taught me to read, write, debate, solve equations, clean dishes, recite Lincoln’s Gettysburg address, make friends, be a roommate—and most importantly, to always appreciate and love the people around me, for which I’m forever thankful.