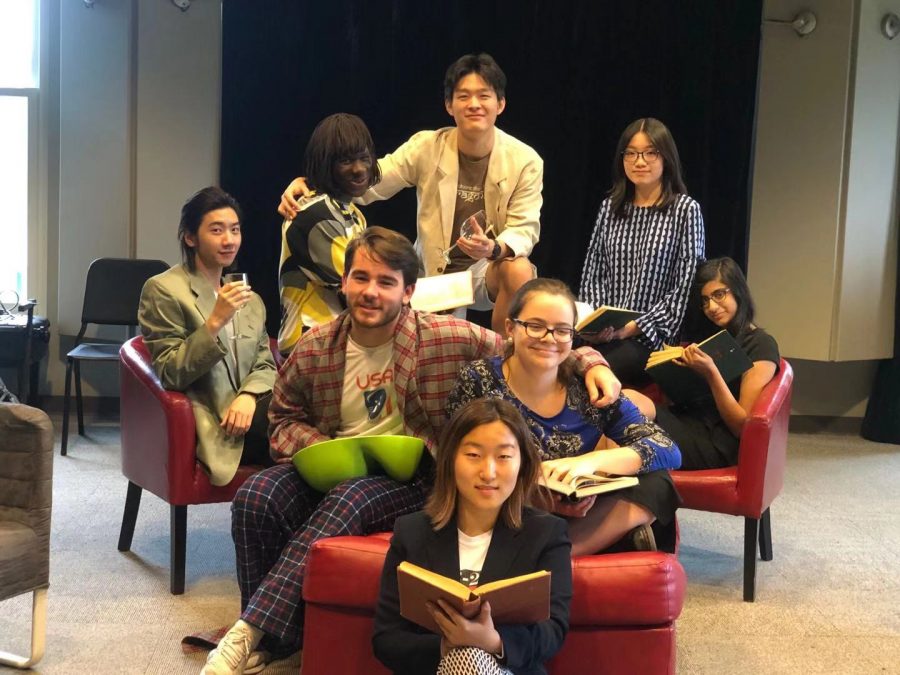 Every year, fall drama brings the academy fascinating stories, surprising us with their gifted acting skills. As the fall season draws to a close, fall drama will soon present their performance. This year, Dr. Monica Palmer, the director of fall play, leads her group of eight students in the comic story, The Book Club Play by Karen Zacarias.

“The play is about a book club that has an opportunity for a famous documentary filmmaker to film their book club. This is so exciting for this book club because this is an opportunity for their book club to be featured in a famous filmmaker’s documentary film. It is comical. They talk about literature. They talk about life. They talk about aspirations and what they want all through various books that they have read,” Dr. Palmer introduced the play. The main theme of the play is that reading is an amazing journey. “Two lives in two countries, in two parts of this world. If you never get a chance to go there, you can experience it through reading a book, reading novels. And in today’s society, we don’t read a lot. And I just hope people will be encouraged through this play to read more,” said Dr. Palmer.

Melina Robertson ’20, the leader of this year’s drama club, plays Ana Smith who is the head of the book club. “I don’t think I would like her in real life. But it’s interesting to play someone like her in the show. I think she is a very complex person,” she said, adding that it has always been interesting for her to try different characters. Melina started her fall play career when she was a ninth grader. Now, it is her fourth year in the theater, and this experience makes her one of the funniest and most attractive actors on the stage. “She is talented,” Dr. Palmer commented. Melina also feels something new about being a senior in the group: “I feel very much like a leader here. I think I really do a good job of interacting with the younger students serving as a mentor and really a role model for them to look up to.”

Another senior in the group this year is Scotch Wilson ’20, who has the role of Rob, a man who doesn’t read books in the book club. Scotch described Rob as “a man with a big heart. He’s nice to everyone, but he never goes deep.” Like he did in his chapel talk, Scotch brings the audience into the play through his humorous performance. “He is definitely an amazing actor,” said Dr. Palmer. “It’s really a fast-paced play, so it’s interesting. There are some funny parts, which I like a lot,” said Scotch.

Both of these two seniors are talented actors and helpful big brother and sister. “This is my second production with both Scotch and Melina,” said Dr. Palmer. “It’s really been a joy to work with them.” Other members of the group also work hard in this production. “I get some juniors and sophomores such as Lily Zhao ’21, Bejunior Fallon ’21 and Jerry Fang ’22. They are all experienced actors who I love to work with. Also, there are two ninth graders in the group, and I believe my fall-play group will bring the community a fantastic production.”