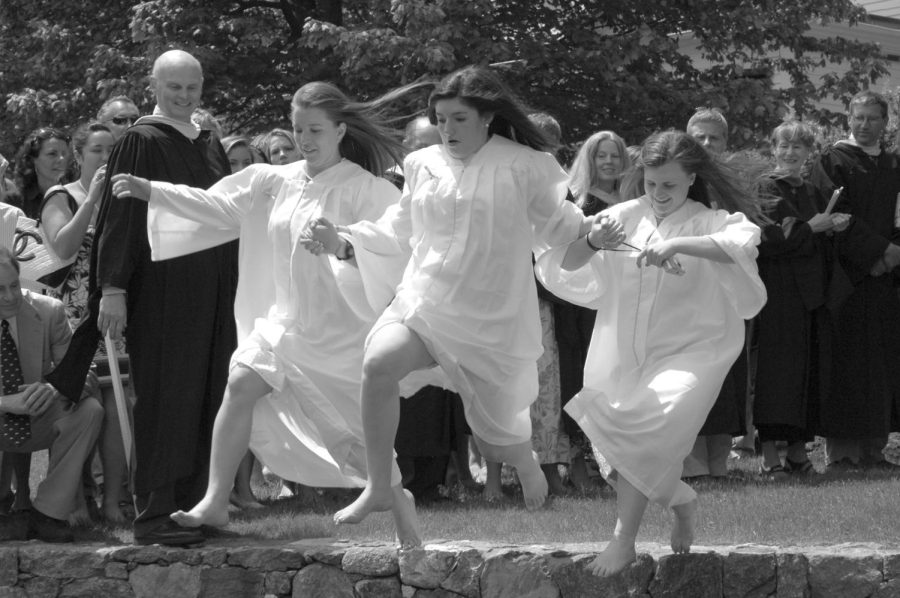 As Byfield greets spring, many events to look forward to are coming around the corner: the end of the school year, summer, and, perhaps most importantly: graduation. The 2022 commencement will be the first post-covid and in-person graduation in two years, ever since the Governor’s Academy went online in the spring of 2020. Interestingly, this means that the current seniors are the only students who have attended this celebration in person, while the majority of students have only heard about it. Thus, with the help of Ms. Slater, the Academy’s archivist, this article serves as a beginner’s guide to commencement week: what it is, what to expect, events, traditions, and some things to (or not) look forward to.

The Senior-Faculty dinner: A Meal with Student Servers

The Senior-Faculty dinner takes place on Friday night of commencement weekend. At the dinner, seniors and faculty sit at different tables, eat a fancy meal, and listen to three speeches. By tradition, one is made by a faculty member, and the senior class votes to decide on two student speakers. “One of the student’s speeches will usually be kind of funny, joking around, including often the names of every senior in some way. And then the other one will be a little more heartfelt, love you all kind of deal…emotional,” Ms. Slater explained. It should be noted that sophomore boarders serve this meal and are asked to leave before the speeches (and eating) begin. “They sort of shoo the sophomores out.”

After the dinner on Friday night, the Senior Show takes place in Wilkie. Students look forward to this show which includes performances ranging from talented singers to group performances. Ms. Slater described: “You’ll have groups like Ingham dorm, who, they can’t sing as a group, but they’ll get out there and they’ll sing a song. Probably Wagon Wheel or something… I don’t know how many times dorms sang Wagon Wheel.”

A day prior to commencement, Baccalaureate occurs in the morning, followed by High Tea. Unfortunately, only seniors, their family, and faculty are invited. “They’ll have sushi and fancy little appetizers, nice desserts, tea, and coffee under the tent outside Phillips,” described Ms. Slater.

After high tea, the bells will begin to ring, inviting underclassmen, seniors, faculty, and family to join and form a circle around the flagpole. The junior class leaders will carefully present a folded flag and lift it up halfway (in fact, they have dress rehearsals where they practice so they don’t drop the flag.) This is when Dr. Quimby will start his speech, beginning with the history of the Morse flag, then proceeding to describe the winner in very generic terms, slowly revealing more details; the suspense in the air builds, and finally, the name is announced. The winner—a senior whose record in all respects meets the highest approval of the faculty—will raise the flag completely, and everyone will then walk to the fieldhouse for senior awards.

Commencement finally takes place on Sunday. In the morning, all seniors have breakfast at Mansion House with Dr. Quimby and Dr. Laurie, while those who have not fulfilled the community service requirement or missed classes set up chairs on the lawn. Prior to the graduation ceremony, at around 9:30 am, students and faculty dressed in formal attire and robes line up in front of Phillips. “The seniors come through running, and it gives the underclassmen a chance to say goodbye to all the seniors they know as they go past,” Ms. Slater describes.

After the ceremony, all seniors and faculty head over to the Little Red Schoolhouse to exchange their final goodbyes before jumping the wall.

Jumping the Wall: flames and vehicles

Many students at Govs have heard of jumping the wall at graduation and the superstition that one shouldn’t do so prior to the ceremony. It is often seen (or imagined) by students as the climax of commencement week when students take a final jump to leave the “Byfield Bubble.” Ms. Slater shared some even more interesting moments from past “jumping sessions” that will probably spice up your impressions about jumping the wall. Around six years ago, a student from the Governor’s Academy wanted to spice up his jump and decided to drive his car (a big SUV) down the driveway right up to the wall before jumping over it. On other occasions, jumps would almost get out of hand as some friend groups took way too long to jump or lit up firecrackers. “That was when the faculty decided we need to rein in this jumping off the wall,” said Ms. Slater, “No motor vehicles, no flame. Nothing is to be set on fire, and nothing is to be driven.”

This less well-known graduation tradition began in honor of a young teacher who passed away in his sleep one summer —he was a big runner and friends with Mr. Quigley. After his passing in 1999, Mr. Quigley, along with Govs students, started this tradition. Students and faculty families would run two miles early in the morning, at around six am, from the milestone to another milestone further down the path.

The Academy’s senior song was originally written by headmaster Teddy Eames. It is believed that this song shares the melody of the Amherst College’s (the college Eames attended) alma mater and Eames had filled in the lyrics with words of Byfield. In past years, seniors would learn this song together on the overnight Brantwood trip, which was unfortunately canceled this year due to COVID. Thus, it is still unknown if the senior song will be sung this year by seniors at graduation. The lyrics of In Byfield Days celebrate memories made in Byfield and the life-long bonds that form here: “Gather closer hand to hand, the time draws near when we must part; still, the love of Byfield days will linger ever in each heart.”