This Spring, I decided to bring back Rose Robinson’s definition of ‘Chillin’terviews’—by randomly selecting an interviewee and having casual conversations with them. Hopefully, these interviews will bring you a good laugh or some new perspectives. Grab a drink, some snacks, and come chill with us!! 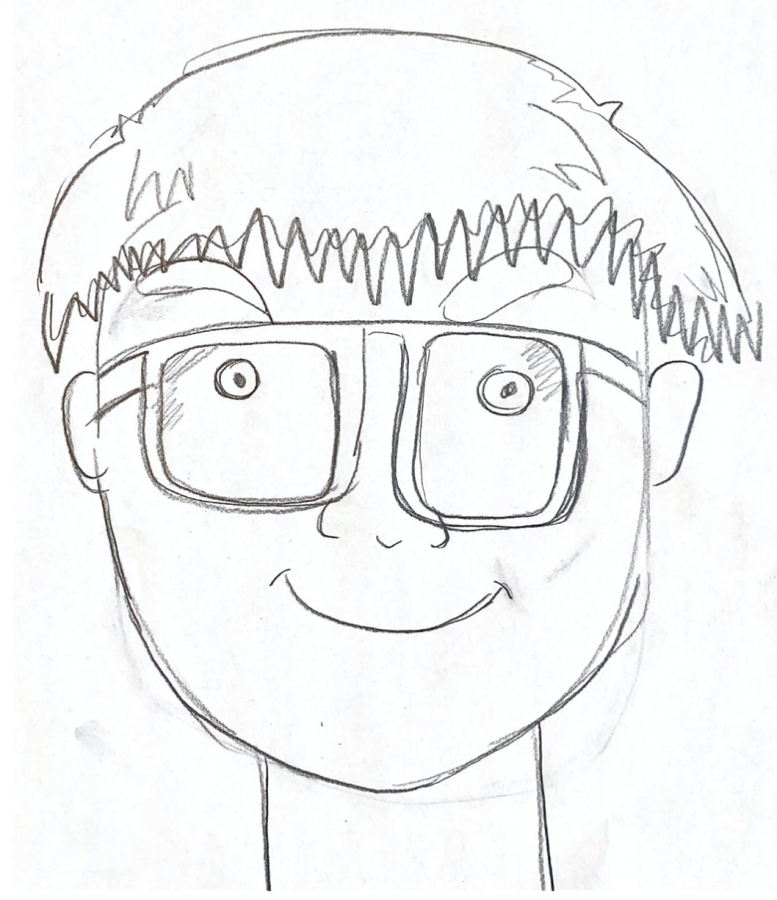 Juneseek: Artist Rendering by the author

On a slightly chilly (no pun intended) March afternoon, I walked into the student center to find it nearly empty, with only a few lingering there preparing for the afternoon program. After a few minutes of awkward deliberation, I finally located Juneseek and asked if he’d be willing to have a conversation. Unfortunately, he had to decline my offer at first because yoga (his afternoon program) was starting soon. In dismay, I sat down again to search for another possible target. Yet — to my surprise, Juneseek reappeared a few moments later—yoga was canceled due to the rain, so we sat down for this lovely conversation. We discussed topics ranging from weird food (pig intestines), to math to deep-sea creatures. Enjoy!

Elina Zhang: Okay! Describe your day in one word!

What animal do you think best represents you?

author’s note: for some reason, I had developed a curiously questioning manner… I mean, this is an interview, but still.

JK: Yeah. It’s not that fast, but it goes steady, and it has high endurance.

If you could rename yourself, what name would you pick? Why?

JK: David. It was the name of a middle school teacher I really liked.

EZ: Oh really? What subject did he teach?

EZ: Do you mind sharing why you really liked him?

JK: He was really kind and he had a great sense of humor, so I really liked his classes.

EZ: Well, maybe you should name your child after him!

On to the following question: what is the weirdest thing you’ve EVER eaten?

EZ: Oh! That I’ve had before, it’s quite delicious… Also, pig brains!

JK: I haven’t had those before.

EZ: (Laughs) On what occasion do you have raw beef?

JK: It’s actually one of my favorite foods.

EZ: So is it a specific cuisine?

EZ: What do you eat it with?

JK: People usually eat it with pear, peppers, sauce. But I just eat it by itself.

EZ: Pear as in the fruit pear?

EZ: I have a question. Since you also run the math club, you like math, right?

EZ: Is there a reason you like math, or what about math appeals to you?

JK: It’s straightforward, and there’s an answer to every question, for example, on quizzes, unlike in English.

Okay, what do you miss most about pre-Covid Govs?

JK: Not having to wear masks.

EZ: (Pauses to fantasize about not wearing masks) Not having to wear masks. Also not having to practice social distancing, yeah.

Could you describe the most awkward moment you’ve endured at Govs?

JK: Uhhh, when I first came here, I got lost at night.

JK: I don’t even remember where it was…

EZ: It was at night? Was it pitch dark?

JK: Yeah, I think it was one of the weekend events (pauses) and I got lost.

EZ: I got lost a lot of the time, too. (Recalls awkward memories) It happens.

JK: It’s some drawing I found on the internet. A drawing of a forest.

(Shows me his wallpaper, a nature illustration)

EZ: Ooooh, I like that. Keeping the yoga theme going!

In your opinion, do you think hot dogs are sandwiches?

JK: Uhh (pauses to think) No. I think sandwiches are some sort of food between two pieces of bread, not one.

This one’s interesting: Would you rather be reincarnated as a sea creature or an airborne creature?

JK: Ummm (takes a moment to ponder) airborne creature. Because first I can fly, and I don’t really want to be in the water, in the deep ocean where it’s really dark and kind of creepy.

EZ: I agree!!!! I have a fear of deep oceans as well. Imagine people who go scuba diving! It’s all dark, and you never know if something’s going to prance on you.

JK: And all of the deep-sea creatures are kind of creepy (pauses, perhaps in fear?) they don’t have eyes…

EZ: (Laughs hysterically) They don’t have eyes!?!! (Continues to laugh)

Okay, last question! Is there anything you are looking forward to today?

EZ: Going to bed! That’s like me every day! But you know, nowadays sometimes going to bed doesn’t even happen today, because it’s after 12 am. So technically, it’s tomorrow.

~author’s note: I apologize. I was genuinely trying so hard to be funny (and chill)~

EZ: Thank you so much, Juneseek!!!